About a month ago on Twitter I picked up a call for guest reviewers, put out by the splendid Sharon from Shaz’s Book Blog. She was looking for folk to take some of her teetering TBR pile off her hands, and I thought – hell, I could do that.

So I stuck my hand up, Shaz posted me a book, I read it, and then I wrote about it. Here’s what I wrote (also posted here at Sharon’s place). 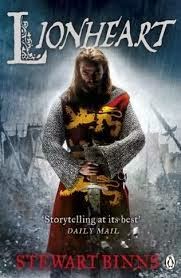 1176, England. King Henry II reigns over a vast empire that stretches the length of Britain and reaches the foothills of the Pyrenees. But he is aging, and his powerful and ambitious sons are restless. Henry’s third son, Richard of Aquitaine, is developing a fearsome reputation for being a ruthless warrior. Arrogant and conceited, he earns the name Richard the Lionheart for his bravery and brutality on the battlefield.

After the death of his brothers Richard’s impatience to take the throne, and gain the immense power that being King over a vast empire would bring him, leads him to form an alliance with France.

And so Richard begins his bloody quest to return the Holy Land to Christian rule.

I started this book with a great deal of anticipation – I love a good historical novel, and the twelfth century is a time about which I know very little. The book is the fourth in Binns’ Making of England quartet, dealing with the period from 1176 to 1199 and recounting the reign of Richard the Lionheart and the Third Crusade to the Holy Land, Christendom’s abortive attempt to recapture Jerusalem after its capture by Saladin.

The story is told from the point of view of the fictional Sir Ranulf, a relatively lowly English knight who becomes a military advisor to the King and travels with him across Europe and the Holy Land. The narrative is rich with detail, the story lurches from fights and betrothals to betrayal and captivity, and the historical events and battles were clearly meticulously researched.

So far so good. However, for me a historical novel needs more than an in-depth understanding of the period. It needs good characterisation, believable dialogue and emotion, and I felt all these aspects were lacking. Sir Ranulf was a wooden and one-dimensional mouthpiece for the historical events, with little emotional rise and fall in his narrative.

In order for him to be present at all the major events in Richard’s life the author needed poor Ranulf to make some very foolish decisions – I felt a bit sorry for him, to be honest, since at various points he lost almost everything (friends, lands, titles, two women he loved – oh, and a hand) pursuing Richard across the known world. The King himself, who by all accounts was a charismatic, forceful and brilliant man, came across as flat and rather nice-but-dim, an impression exacerbated by the frankly appalling dialogue. It was rigid and stilted, mixing modern idioms with older formulations in a rather slapdash fashion.

Overall, in its wealth of historical detail this book was informative and interesting; if it had been written and presented simply as an account of the Third Crusade I would have enjoyed it much more. However, as a novel I felt it didn’t really work. It lacked depth and emotion, and I ended up annoyed with it because the novelisation elements felt so clumsy. All in all, the effect was to turn the Third Crusade into something like Five Go Mad in Palestine, with lashings of historical detail but not much soul.

The book is (or soon will be) available from the usual online outlets – here and here for starters – but if you want to read it, I have a copy you can have. No, really, I insist. You can have it. First person to send me their address via the contact form below gets it…